The Cebu CFI Community Cooperative or CFI, for short, was initially organized in response to the abusive lending practices imposed upon employees of the Courts of First Instance of Cebu.

Back then, the Court of First instance (CFI) was the primary court in the country which has the first jurisdiction to hear and decide civil and criminal cases. It was the predecessor to what is now the Regional Trial Court. 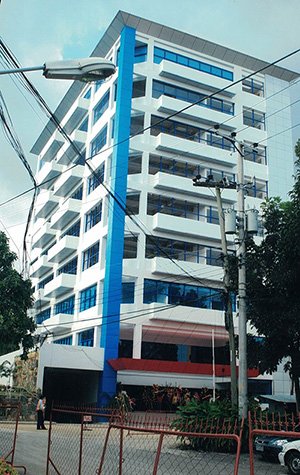 In Cebu, they were housed inside the Capitol building of the Cebu provincial government at the Capitol site of Cebu City. It had 10 branches and around 200 employees, more or less. As it is often true today,  most of the CFI court employees never get to see their salaries on payday as they were already mortgaged to money lenders charging unreasonably high interests from 10 to 20 percent a month.

As a consequence, these employees oftentimes fall into a debt trap, a vicious cycle of indebtedness which just keeps piling up as interests on their loans continue to eat upon their meager income. Inevitably, they end up mortgaging everything they have, present or in the future, to continue borrowing in order for their families to survive.

Thus, the CFI was born with the noble purpose of freeing these employees from the bondage of the usurers or the “loan sharks”  as we call them nowadays. It was spearheaded by the late Judge Esperanza Garcia, the Clerk of Court at that time, with the strong support t of the former Executive Judge of the CFI and former Chairman of the Commission on Audit, Judge Francisco Tantuico.

The idea was very simple. Why not pool the funds of CFI personnel and their friends into one common fund to lend to CFI employees at interest much lower than the usurious interest they were paying from the money lenders. It was a win-win proposition for both the investor and the borrower. The investor will earn interest on his money much higher than bank deposit rates while the borrower will be paying interest at much lower rates than what he pays from the money lenders.

Thus, sometime in April 1970, CFI was organized with only 29 members and a capital of P200.00. Originally, the cooperative was intended for employees of the Courts of First Instance. Thus the 3 letters of CFI found in the name of the cooperative. However, over the years, it expanded to other offices and establishments in the government and private sectors. Thus, the word “Community” had to be added to its name.

Yet, for want of a shorter word to call the cooperative, members conveniently call it “CFI” and these 3 letters stuck through the years even up to the present time. These 3 letters also gave a special purpose for what the cooperative stand for its members. As the cooperative they always invoke at the first instance of financial need, it is for them and will always be their “COOP of First Instance”.

Today, CFI is a multi-billion cooperative with a membership base of 155,000 members.

To get better experience, please open the website with Chrome/Safari web browser.